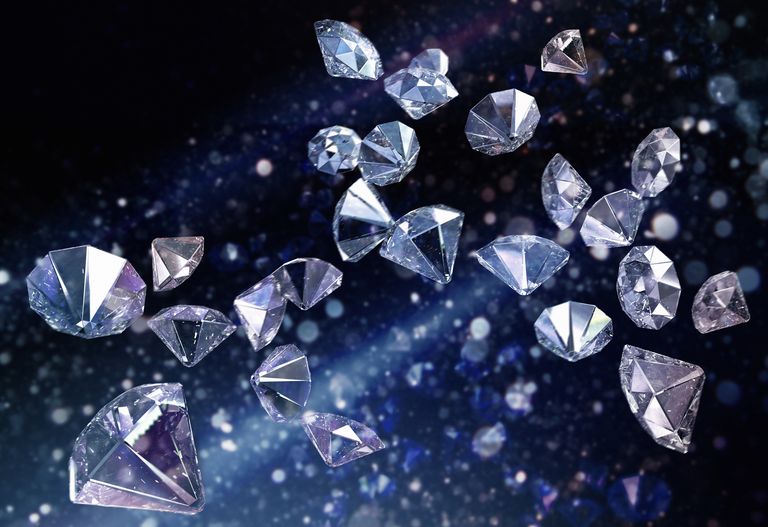 Diamonds have been a fixture in high-end American jewelry circles since the late 1940s, when the South Africa-based diamond company De Beers initiated their famous “A Diamond Is Forever” campaign. Having successfully convinced millions that a diamond was the only proper jewel for a proposal, De Beers became a billion-dollar company. Cut to today, Rihanna’s lyrics prove that diamonds are still at the engagement ring vanguard. Over 70% of engagement rings are diamond, with the average ring price at ~$5,000. Aside from the price tag, the jewel has a long, troubling history of violence and child labor—despite the efforts of decades-long campaigns to legitimize diamond supply lines, like the Kimberly Process Certification Scheme. In this article we’ll explore how diamond are formed and mined, as well as several eco-friendly and more sustainable alternatives.

All the diamonds we mine today were formed about 100 miles below the Earth’s surface, where high temperatures and pressures worked in tandem to grow diamond crystals. They made it to the surface through a series of volcanic eruptions, where they cooled simultaneously with the volcanic material. Scientists believe most diamonds were formed ~1-3 billion years ago, although some young diamond deposits may be only hundreds of millions of years old.

How do scientists determine these timings? Typically they look at mineral inclusions within lower clarity diamonds (the ones that may not be “perfect” enough to be a center stone of a ring). These inclusions contain potassium and other elements that are used in radioactive dating experiments.

The evolution of commercial diamond production

Although diamonds were first mined in India a couple thousand years ago, they didn’t make a commercial splash until the 19th century. Until then, they were reserved primarily as jewelry for the aristocracy and royals. All this changed in the 1870s, when large diamond deposits were discovered in South Africa. Simultaneously, wealthy families in the United States were developing a taste for diamonds.

Diamond production was quickly dominated by De Beers Consolidated Mines in 1889. The head of De Beers, imperialist Cecil Rhodes, and other English businessmen in the mining business, realized that the success of diamond marketing was tied to consumers believing the stones were rare and valuable (look into the “A Diamond Is Forever” campaign). By manipulating diamond supply and demand, De Beers and others were able to maintain high profits.

The glittering ad campaigns belie an industry entrenched in negative social and environmental outcomes. In the Democratic Republic of Congo and Sierra Leone, back-breaking mining work is often performed by children and poorly paid adults—profits are used to fund civil wars. Consumers wanting to learn about their diamonds’ origins are learning that the diamond tracking process is opaque; diamond retailers often cannot pinpoint what mine the stone came from.

In 2000, a meeting of the world’s top diamond producers in Kimberly, South Africa led to action: over the course of the next three years, the United Nations established the Kimberly Process (a system where diamonds received “passports” from their country of origin) was designed and ratified by 52 governments. Although this was a step in the right direction, critics believe the system has loopholes that still allow for unfair labor practices and abuse—and doesn’t address the forced migration of people living in prospective mining areas. NGOs, human rights watch groups, and commercial diamond brands have argued for a new and improved tracking system; hopefully, consumer knowledge and vigilance will push that forward.

Lab grown diamonds rank high on the list of mined diamond alternatives. Since the 1950s, the General Electric Research Laboratory in Schenectady, New York has shown that that it’s possible to make such a stone; all you need is a carbon and iron mixture (seeded with natural diamond) subjected to 50,000 atm of pressure at 1250°C.

Today, the man-made diamond industry is growing in popularity, especially in the more eco- and cost-conscious millennial and Gen Z consumer groups—a 2018 diamond market study revealed that 70% of millennial respondents would “consider a lab grown diamond for an engagement ring center stone,” a trend that’s expected to continue.

Misgivings on the industry’s ethics and a desire for less expensive rings have given rise to the alt-gemstone market, which includes sapphires, moissanite, and lower-quality (and more easily mined) “salt-and-pepper” diamonds:

For more information about the diamond industry, check out the “Diamonds” episode of Vox’s Explained series and National Geographic’s Diamonds of War.