We’ve probably all heard it before. We need to find renewable fuel sources that can keep up with the energy demands of our twenty-first century lifestyles. Coal, oil, and natural gas are not considered sustainable; once we burn them, they’re gone. It is predicted that the earth contains enough fossil fuels to last us hundreds of years, but once the fossil fuels they run out, our energy source is depleted. It may seem like we have plenty of time to develop better energy solutions. But what about the raising average temperature of the earth, melting ice caps, rising sea levels, and changing weather and climate?

Climate change has real and significant effects. If we continue in this direction, one-fourth of the species on earth could be extinct by 2050. In addition, burning fossil fuels produces carbon dioxide, a greenhouse gas, which greatly contributes to global warming. The greenhouse effect occurs when greenhouse gases, like carbon dioxide, trapped in the atmosphere absorb solar radiation, which heats the earth to higher temperatures. Carbon sequestration, which is the long-term storage of carbon dioxide, can help mitigate global warming, but renewable energy sources, a solution rather than a bandaid, should be the goal. The Living Building Challenge seeks to change how we get our energy.

The Energy Petal has one imperative, and it presents quite a challenge. A Living Building must produce 105 percent of the energy required by the project site. The excess energy can be fed back into the grid, or in the case of the Living Building at Georgia Tech, the excess can be used by other parts of campus. This energy must come from a renewable energy source that can operate year-round and pollution-free. In addition, no combustion is allowed, as combustion produces greenhouse gases, and there can be negative long-term impacts on human and other ecological health.

A number of possible clean energy solutions exist that harvest energy from carbon-neutral sources such as solar, wind, and hydroelectric sources, but storing the energy from these sources presents an additional challenge. For example, solar energy can be captured by photovoltaic cells (solar panels), but a building needs energy continuously—not only when the sun shines. A Living Building must be able to store enough energy for at least ten percent of its lighting load and refrigeration use for one week, so the project must invest in energy storage infrastructure.

A Living Building should be constructed in a way that maximizes energy efficiency. Photovoltaic panels can be placed on the south face of a building to maximize the amount of sunlight they receive. A Living Building can use a smart lighting system to save energy, so energy is not wasted to light an empty room. Furthermore, a radiant floor heating system helps reduce energy needs because it is more efficient than forced air heating, as heat rises. 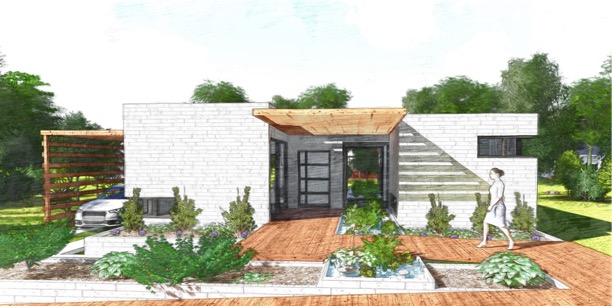 I had the chance to sit down with William Courrèges-Clercq (check out the full interview here), the business team lead for Georgia Tech’s Solar Decathlon Team. Composed of 43 highly motivated undergraduate and graduate students, the Solar Decathlon Team is demonstrating how renewable energy solutions can be affordable and accessible for the general public. Every two years, the U.S. Department of Energy hosts the Solar Decathlon, challenging collegiate teams to design, build, and operate solar-powered homes. The next competition will be held in 2017 in Denver, Colorado, so the Solar Decathlon Team is currently busy designing the Solar Home at Georgia Tech. As the name suggests, Solar Decathlon is made up of ten different competitions, and to meet the requirements, only solar energy technology is allowed to generate electricity for the house, which must be no larger than 1000 square feet. Solar Home will have an eight kilowatt photovoltaic array along with battery storage and grid hookup. A computerized system will help the homeowner to minimize electricity costs by determining when to pull electricity straight from the photovoltaic array, when to store it in the battery, and when to sell energy back to the grid. William also stressed that Solar Home is to be “made in Atlanta, by Atlanta, for Atlanta by the students of Georgia Tech” as a way to give back to the community. Atlanta is the sustainability hub of the south, and there are lots of ways in which Atlanta and Georgia Tech are making strides in solar energy. The goal is to get the house to net zero energy and to show the public that solar energy technology is much more developed than ten years ago and is a viable solution that anyone can take to be more sustainable.