Place is the first of seven Petals, or categories, that comprise the Living Building Challenge, and rightly so. All of the elements required for a self-sustaining building are dependent on its location. The climate, region, and natural topography of the project site must be taken into careful consideration because the built environment should seamlessly coexist with its natural surroundings. A living building must be well adapted for its environment so that it can generate energy, capture and treat water, and grow food in the most efficient way.

Atlanta’s weather can be quite temperamental. I’ve been told that if I don’t like the weather, I only need to wait about ten minutes for it to change. Therefore, the Living Building at Georgia Tech has to be able to withstand hot, humid summers, days and possibly weeks of rain during the Atlantic hurricane season, potential drought that results in lowered lake levels, and the rare event of snow and ice, which causes the city to come to an absolute halt (see Atlanta Snowpocalypse 2014). In a climate that seems a bit unpredictable, the Living Building at Georgia Tech must be net positive in both water and energy over a twelve-month period as well as grow food.

To meet the Place Petal requirements, the Living Building at Georgia Tech will have to meet the following four imperatives: 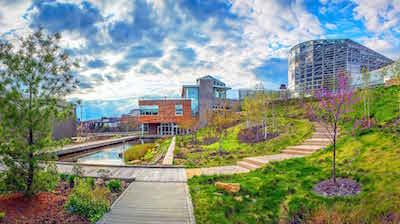 The Phipps Center for Sustainable Landscapes (CSL) in Pittsburgh, Pennsylvania was constructed on a former brownfield. It was previously a 2.6 acre asphalt lot, which housed an obsolete Pittsburgh Department of Public Works storage facility. The project team carefully stripped away the asphalt and carried away old utility lines. The restored brownfield is now healthy and safe for people, plants, and animals, and its landscaping includes a terraced garden and green roof.

This imperative allows everyone who frequents the living building a chance to reconnect with nature and their food sources. Who doesn’t want to eat yummy, sustainable food? Urban agriculture is the process of cultivating and distributing food around a community. Food brings people together, and when people grow their own food, they are able to connect with each other and the land. Urban agriculture is not just limited to growing fruits and vegetables but also includes aquaculture, which is raising fish for human consumption, and raising animals, including bees for honey. Plants do not only have to be grown traditionally in the ground or in raised planters, but they can also be cultivated in beautiful vertical or rooftop gardens, hydroponic gardens, or orchards. 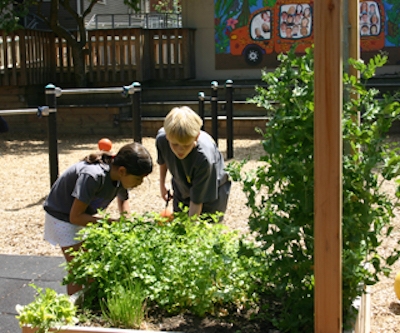 The Bertschi School Living Science Building in Seattle, Washington boasts two gardens, an organic vegetable garden and an ethnobotanical garden. In the vegetable garden, elementary school students learn how to grow their own food and do all of the planting, weeding, watering, and harvesting. Their veggies are served as snacks in the after school program. In contrast, an ethnobotanical garden contains indigenous plants used by people of a certain region or culture. The Bertschi ethnobotanical garden contains indigenous plants from the Northwest region. This garden helps to teach students about the native peoples who used the plants for food, clothing, tools, and medicine. The garden also has plant markers that each have a QR code. When scanned these codes link to the scientific name of the plant and additional information.

A significant goal of the Living Building Challenge is to preserve and expand existing wildlife areas and prevent their destruction by development. This imperative seeks to conserve existing habitats and does so by requiring that for each hectare of the project site, an equal amount of land will be conserved through the Institute’s Habitat Exchange Program or an approved land trust. While we humans get to enjoy a new living building in an urban setting, animals and plants can continue to live in their thriving ecosystems without the threat of human development compromising their habitats. 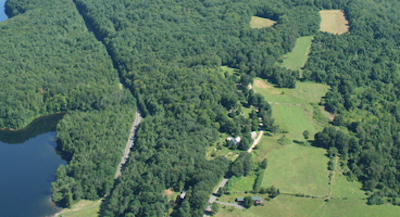 Smith College's Bechtel Environmental Classroom in Whately, Massachusetts serves as a seminar and lecture room, dry lab, and small office at the Ada and Archibald MacLeish Field Station. Smith faculty and students can pursue environmental research and outdoor education at the MacLeish Field Station. During the project, the majority of the existing 240-acre field station was preserved for conservation. This conservation effort expanded the area of the protected habitat of the Jefferson salamander. The Jefferson salamander is a species of special concern in Massachusetts and considered threatened in Canada due to its decrease in numbers and shrinking habitat.

Who likes to take the stairs? We all know it’s better than taking the elevator, but most buildings have centrally located elevators and slightly obscure stairways. To meet this last imperative under the Place Petal, living buildings must be designed in a way that minimizes transportation-related pollution. The building layout should encourage people to take the stairs and promote mobility. Onsite showers, enhanced pedestrian walkways, and protected storage areas for human-powered vehicles promote biking or walking to work. 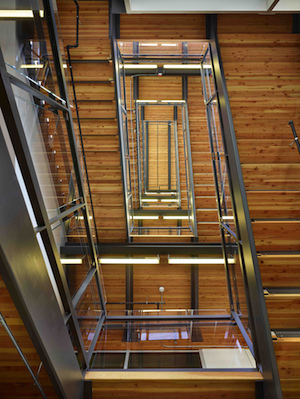 The Bullitt Center in Seattle, Washington has a unique design that promotes physical activity to reduce energy and support a healthy lifestyle. Its prominently located staircase, dubbed the “Irresistible Staircase,” entices people to take a climb rather than riding in the elevator. Besides getting in a light workout, those taking the beautifully crafted wood steps get a stunning view of downtown Seattle and Puget Sound.