Water. Everybody needs it to survive. We even found it on Mars. Water covers roughly 71 percent of the earth’s surface, but the amount of potable water that is safe for human consumption is at risk due to water shortages and poor water quality around the world. As a result, water scarcity affects over one billion people worldwide. For various reasons such as water overuse, pollution, drought, war, or distance, people cannot get the water they need. It affects places on every continent from developing countries to the United States, including Flint, Michigan, which has had lead-contaminated water, and even the Atlanta metro area has recently entered a severe drought. With the problem in our backyard, the Living Building Challenge urges us to respect water as a precious resource and redefines how we treat our water sources.

The Water Petal only has one imperative—net positive water. Net positive water requires that a certified living building meet more than 100 percent of its water demands by collecting, treating, and recycling water on-site. Over a twelve-month period, a living building must generate and treat a greater amount of water than the building needs to operate, and the excess water may be used by the community. Aside from the fire/life safety systems, the building and project site should not be tied into the municipal water system. It is a large task, considering the project site must support urban agriculture, which requires a fair amount of water for irrigation. In addition, the water cannot be treated with chlorine, calcium hypochlorite, or sodium hypochlorite (here is the chemistry nerd in me) because these are harmful chemicals that are banned by the Red List, a list of over 800 chemicals that have been deemed harmful to living creatures and/or the environment by various regulatory agencies.

To achieve net positive water, a living building will be built to mimic the natural hydrology of the project site. Rainwater will flow into a large cistern. This rainwater will be treated and used within the building as potable water. Potable water used for washing becomes grey water. This grey water might be used to irrigate the urban agriculture on the project site, recycled and used to flush toilets, or treated to make it potable again. Water that contains human waste from toilets is considered black water and must be treated on-site. Most of the time, a living building uses a closed-loop system to capture, treat, and recycle all of the water on the project site, so the building’s potable water may be a combination of treated rainwater and former grey water. 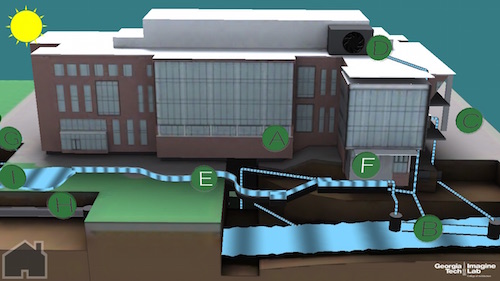 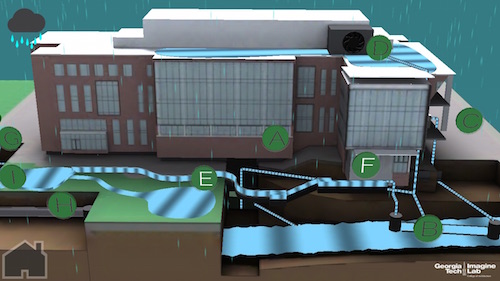 Although the Engineered Biosystems Building (EBB) is not a certified Living Building, its water management provides keys as to how the Living Building at Georgia Tech might manage its water. The EBB is designed to divert groundwater from the slab and foundation walls through a conduit to a low collection point. A pump takes this water to the filtration and cistern system. The EBB also captures rainwater and chiller condensate in the 10,000 gallon cistern. This water is used to flush toilets inside the building and irrigate the surrounding landscape. The EBB’s water management plan is part of the larger Georgia Tech Stormwater Master Plan.